Last week I attended a Collabo event for the first time. It’s a monthly music business mixer event, bringing together established and aspiring musicians under the theme of collaboration. This month’s event took place at DeLux and had a pretty diverse panel talking about breaking barriers and crossing over:

I enjoyed listening to the panel, hosted by Collabo creator Mary Datcher, President of On The Street Promotions and Marketing. However, my true big moment was meeting AK from Do or Die! He was at the event promoting and performing his new solo single (and yes, Do or Die is getting together to do another album soon).

And yes, meeting AK was even better than eating a gallon of tater tots: 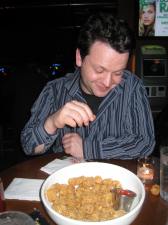