Blah Blah Blah – Why am I the only one laughing

I recently reconnected with an old family acquaintance, Kasia Koniar, and heard that she just produced & directed a music video for Blah Blah Blah. The video is for “Why am I the only one laughing,” a single from the band’s forthcoming album, Thank You, Thank You, which is set for release this August.

I hadn’t heard of the band before talking to Kasia, but I’m feeling their sound – described as a “fusion of New Wave and Brit-Rock.” The video is really cool, and set in the glamorous Blackstone Hotel – awesome location for a music video. It even features a cameo from Chicago’s own Candace Jordan.

Here’s the scoop on the romantic story behind the video from Kasia herself:

“I heard about [Blah Blah Blah] through another band I directed for, and instantly fell in love with the sound. I kept listening to the song over and over. SO I decided to go after them. I emailed them out of the blue and opened a dialogue…in the end they liked my ideas. We ended up prepping all this in a month with pretty much no budget. We shot in 1 day at the Blackstone Hotel. The shoot took 18 hours. I edited with an editing consultant in 2 weeks and now here we are. The launch of the vid was scheduled to coincide with the launch of their new EP.”

And here are some behind the scenes photos of the video shoot in action: 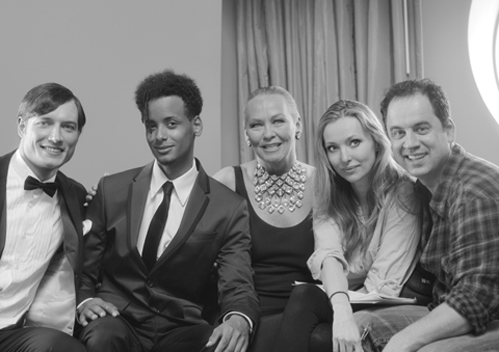 Coincidentally, I just heard Blah Blah Blah will be playing a free concert this Sunday along with Theophilus London, hosted by the creative individuals at Superfun. You can RSVP here.