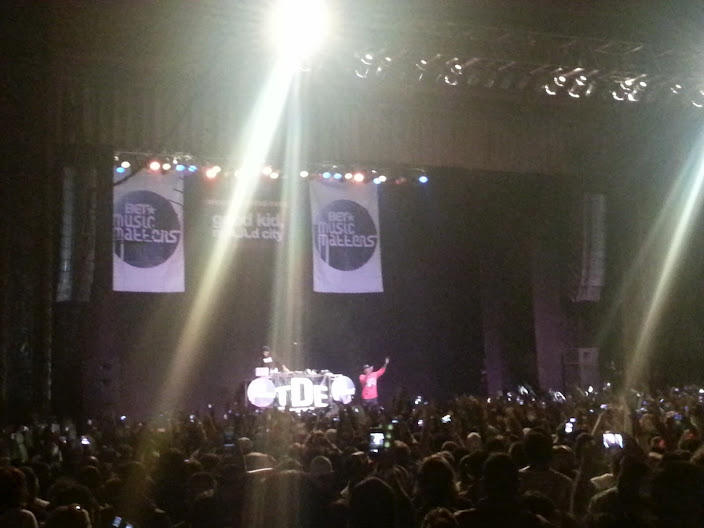 Last night I went to see Kendrick Lamar at the Congress Theater, and even though I’m not a huge fan of that venue, he put on a great show. Chicago’s own Twista and Lupe Fiasco even came out to see him! Both came out on stage to show support, and Lupe announced that Kendrick was his choice for “The Next Big Thing” award, a Samsung mobile-sponsored campaign.

There was a lot of Chicago love in general – both Stalley & Kendrick rocked Bulls gear. Which just goes to reinforce, that most people globally know Chicago for Michael Jordan and the Chicago Bulls – from Peru to Poland, I always get that reference when I tell people where I’m from.

Leading up to all that excitement, Stalley came out on stage to do a set. Although I’ve had the opportunity to interview him twice for my client Muve Music from Cricket, this was actually the first time I got to see him perform live. I really like him as a person – he seems very smart and thoughtful. I also really enjoyed his set and his style onstage; it seemed intense but thoughtful, as well.

But Kendrick Lamar was the true star of the show. His energy is so big – he’s half conducting the crowd, half testifying on stage. I just love his gestures when he’s on stage. It’s like he can’t even contain the energy within himself while he’s performing, and just let’s it all out through his arms and body. And of course “The Recipe” and “Swimming Pools (Drank)” had the crowd going crazy.

If you have a chance to see Kendrick Lamar live, I definitely recommend going!