A couple weeks ago, I saw a Facebook post from the Chicago Urban Art Society about a “French Flipped” pop up dinner they’d be hosting for Cinco de Mayo. I’d been following the CUAS for a while, but had never been able to attend one of their events before, so I signed up for the dinner.

To be honest, I had no idea what to expect. I’d never been to the gallery and I’d never heard of the organizers, Yo Soy Chicago, before. As Adam and I walked down Cermak from Chinatown, across the river, to a “creative district” filled with lofts for rent, we approached the gallery, where the first course was being served outside. 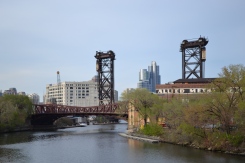 I’d never really been in that area before, but I really liked the vibe. The warm weather was perfect for a quick bite & drink al fresco. And the crowd of “hipsters and benefactors” (as Adam called it) was really friendly. And I must admit, I was looking quite hipsterish myself that day, with my navy-leather loafers.

Between the two of us, Adam and I probably ate about 34 of the little appetizer tartlets, filled with wild mushrooms, poblano rajas, and apple, ginger and beet pico de gallo.

We also sipped on beer cocktails made with Indio beer, which is a Mexican beer that’s just being introduced to the US market. I love my Mexican beers, and I really liked this one, despite it being a little darker than Pacifico or Tecate. It still had a light taste, and I actually really enjoyed the cocktails, which included Indio mixed with tequila. 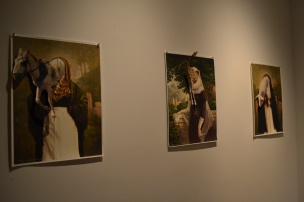 Nothing like being surrounded by interesting art during supper 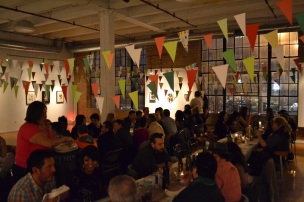 The main course was a “D’orange Puerco” – an orange-guajillo braised pork ribs dish served “en croute.” That meant that it was placed in a super-fluffy dough, similar to filo in texture. It was delish.

Lastly, a beautiful and light dessert came out. A pile of cajeta crepe layers was covered in crème anglaise, with avocado puree and a raspberry on the side. Shout out to D-ology for that yummy dessert – which was also gluten free. And after-dinner entertainment included performances by the Mexican Dance Ensemble.

Overall, I loved my first pop-up dinner experience. I will definitely be looking for future underground suppers from Yo Soy Chicago and the Chicago Urban Art Society. In the meantime, check out the official recap video.