Las Vegas: A Wedding, A Concert, A Breakfast Buffet 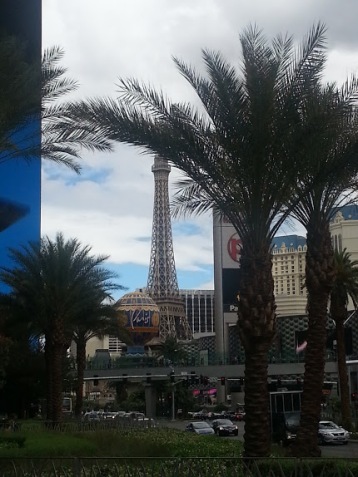 View from our room at the Aria

During my first-ever trip to Las Vegas, I left with a few things on my to do list. Namely: see a concert, lounge by the pool and gamble. Luckily, my friend who first introduced me to Vegas brought me back there just six months later to be a guest at her wedding!

The flight to Vegas was…a journey. After a very early morning at O’Hare (complete with Auntie Anne’s pretzels for breakfast, of course), a layover at Phoenix (which appears to be the most crowded airport in the world) and the middle seat on both flights, we made it to Sin City. Hello, sunshine and hotness! ….except it was actually raining when we landed. Naturally, it rains in the desert when we arrive. Luckily, the weather cleared up quickly and the rest of the day and weekend were indeed sunny and warm. We also had a great room at the Aria, where you could almost see the strip out the window if you craned your neck a bit.

Unfortunately, some rookie tourist grabbed my travel partner Andrea’s suitcase at the Vegas airport, so that left us a few hours to hit the malls and find her a new outfit for the wedding that evening. We found her a dress at White House Black Market just in the nick of time! I rocked my new dress from Target (snagged it on a buy one get one 50% off sale!). 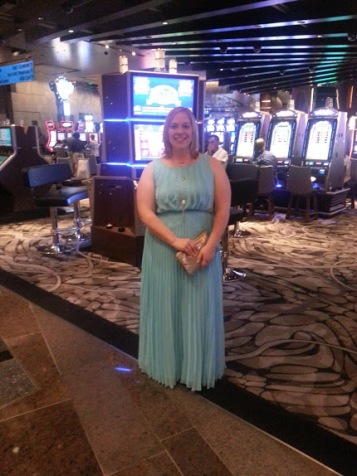 We were super excited to reunite with our friend Tyna, who we’ve known since first grade (well, her and Andrea have known each other since kindergarten — or was it preschool?). The wedding ceremony took place at the Aria’s chapel, and was officiated by a super cute, young Italian guy with a hardcore Italian Jersey accent. I loved it. I also loved the music – Christina Perri’s “A Thousand Years,” played on the piano throughout the ceremony. There may have been tears. The reception that followed included a delicious dinner at Sage in the Aria.

The next day, we had to go stuff our faces at the Bellagio buffet. When we got in the long line, I started having second thoughts about if it was worth the wait — at this point in my life, I can’t think of anything I would really wait in line for — but it actually moved super fast! Although the dining room was a bit dingier and beige than I expected, the food stations covered everything from omelets to seafood to carving stations to Asian-inspired dishes to full-out dinner servings (yes, there was a station that pretty much offered Thanksgiving meals). Oh, and of course dessert. Ultimately, I’d recommend experiencing the legendary buffet spot.

On our way out, we caught the fountain show outside the Bellagio, set to “Big Spender” – the perfect Vegas soundtrack (unlike the random Sheryl Crow song that was playing during an earlier fountain show).

Next up, we hit up the same-day tickets booth to figure out what show we’d see that night. Yes, I wanted to see Brittni, but apparently she only performs every other weekend (womp, womp). I was also very intrigued by all the billboards we saw for Rose. Rabbit. Lie. at The Cosmo, but that was also not happening on a Sunday night. We originally planned to hit up a Cirque show, but made a last-minute decision to see Boyz II Men instead.

What a good decision! First of all, their show took place in a smaller venue, which is always my preferred way to see a concert. And they sounded AMAZING. All their harmonies were completely on point and their voices sounded exactly like they always have. Plus, they had some pretty sharp dance moves too. It was definitely a high energy show, featuring their best old school ballads (End of the Road, On Bended Knee) as well as upbeat classics (Motown Philly). They even did a Motown segment, and then an a capella segment where they brought out Marc Nelson (formerly of Az Yet, and also the guy who sang “After All Is Said & Done” with Beyonce, featured on the Best Man soundtrack) to be their missing fourth man. If you do have a chance to check out the show (at the Mirage), get ready to run up to the stage when the boyz grab bouquets of roses to hand out to fans.

After the show, we cabbed it over to Fremont Street in downtown Vegas. I had no idea what to expect, but it was actually a long pedestrian walkway, lined with casinos and bars and capped by stages with live performances. The performances were pretty cheesy and the crowd was….full of characters. Talk about a prime spot for people watching! The entire street was covered by a huge arched LED screen, so that was pretty cool too. 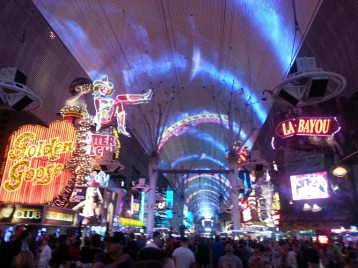 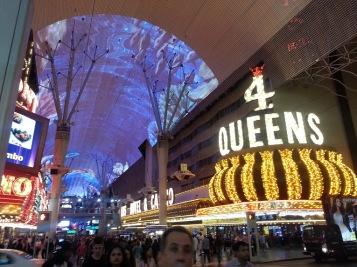 Our last day in Vegas, we snuck in a little more pool time (although we didn’t hit up any pool parties during our weekend) before checking out. With a couple hours to kill still, we had to get down to business and gamble. I’m not a big gambler, and I didn’t even try on my first trip to Vegas, so I knew I had to check my luck this time around. The only gambling I’d ever done before was the slots, so I hit up a couple machines. After a couple small wins, I ended up losing all my money. So enough with the amateur shit, I had to gamble at an actual table. I was tempted to try Black Jack, but my math is not so good. But I heard the roulette tables calling my name. Nevermind neither me nor Andrea had ever played before. We started out by watching another table play, and it seemed simple enough so we sat down at an empty table so the dealer could help guide us through our first shot. After betting on black, I started messing around with the other betting options and betting on specific numbers – and I quadrupled my money! I am officially obsessed with roulette.

Welp, until next time, Vegas! (Note to self: next time, don’t start drinking at noon before getting on a flight. Hungover flying = no bueno).