So Coppenhagen wasn´t necessarily the fairy tale I dreamed it would be, but I really liked it! Especially considering I had never previously even thought about visiting.

The airport was really nice, security was  a breeze and there was a lot of shopping to do. Shopping in stores like Hermes and Burberry that I can´t afford to shop in, but that´s besides the point.

But the highlight, by far, was being able to get out of the airport and going to the city during our layover. Luckily, downtown is just a 15-minute train ride from the airport, which was really convenient. And I must say, there was no annoying plane noise in the city, unlike the ruckus going on by my mom´s house with all the planes headed to O´Hare.

So the concensus is that Danish people are really nice. Quick sidenote – just to confirm, are Denmark residents considered Dutch or Danish? I feel like I´m getting confused here. Regardless, the are very friendly and helpful. We had one guy proactively offer us directions when he saw us acting like total tourists, staring at a big map and looking lost. Then the lady at this one little gallery let us go in and see this photography exhibit for free since we were so tight on time (the exhibit was called “(Fe)male icons” and profiled drag queens.

One thing that was pretty cool is that everyone here rides bicycles. Apparently that´s why everyone looks so healthy and fit! And blonde. It sure must suck to be a brunette in Coppenhagen! I didn´t even see a single McDonald´s around. Granted, we were in a more historical and artsy area, but still. Clearly a relatively healthier lifestyle is the norm here.

One thing that I did see was public toilets. Thankfully, toilets here are quite plentiful, which I´m sure my mom would appreciate!

More than anything, I just really like the vibe in Coppenhagen – it´s so nordic. Duh, that goes without saying. But the overcast day, the cool preeze and the gray water juxtaposed with the colorful and very European houses was very cool. 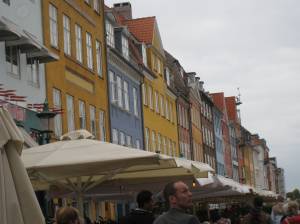